About Door CountyDoor County stretches from about 15 miles south of Sturgeon Bay to the islands that lie off the northern tip of the Door Peninsula. Wisconsin's most conspicuous feature extends like the spout of a teapot into Green Bay and Lake Michigan. The waters on either side of the 70-mile-long peninsula have carved much of its rocky shoreline into caves, arches and cliffs. The overall effect is that this rugged landscape—dotted with fishing villages, beaches, farms and orchards—resembles New England more than the Midwest.

Despite its scenic allure, the treacherously narrow channel between the peninsula's end and its outlying rocky islands was feared by Native Americans and trappers. They named the channel porte des morts, or death's door, from which the peninsula and county take their names.

According to legend 17th-century French fur traders first ran afoul of the strait when Robert La Salle's ship Griffin sank. To circumvent the straits and the tedious trip around the peninsula, traders followed the Native Americans' portage at Sturgeon Bay, which allowed easier passage to the important trade route at the head of Green Bay.

Fur trading dominated the area for 200 years, and it was not until the 19th century that Moravians, Scandinavians and other immigrants settled the peninsula and its surrounding islands. Around the turn of the 20th century wealthy city dwellers discovered the region's charms, transforming rustic villages into resorts.

The peninsula and its islands cater are now a great vacation destination. Sailing on the surrounding waters, hiking and golf in one of the nearby state parks and cultural activities such as summer theater, concerts and fish boils are among the fun things to do here. Historic lighthouses, cherry blossoms and more than 50 sand beaches along Lake Michigan and Green Bay offer many scenic places to go. AAA’s in-person hotel evaluations are unscheduled to ensure the inspector has an experience similar to that of members. To pass inspection, all hotels must meet the same rigorous standards for cleanliness, comfort and hospitality. These hotels receive a AAA Diamond designation that tells members what type of experience to expect. 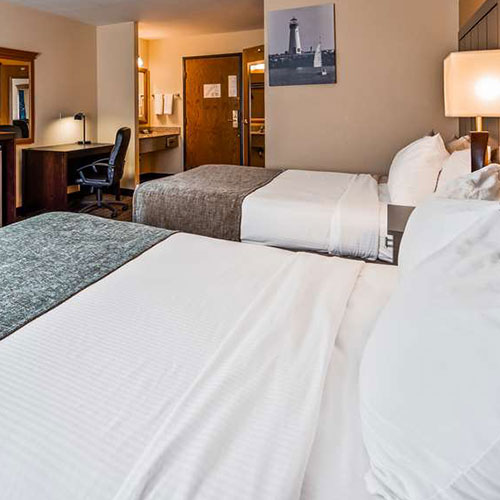 As a AAA member, you'll save even more. Your AAA Travel Agent will check to see if AAA Vacations is combinable with other AAA member benefits, plus cruise and tour past passenger discounts and benefits.